How much did the reduction in road traffic during the COVID-19 lockdown affect the decrease in air pollution levels in Milan?"

The data collected by the automatic control systems placed at the access points of Area B and Area C of the city of Milan in the period between mid-March and the end of April 2020 showed 50% reductions for commercial vehicles and heavy vehicles (buses and trucks) and 70% for cars. This reduction was reproduced thanks to the configuration tool for the circulating fleets and the traffic reductions available in UTAQ. The pollutant concentrations calculated by UTAQ (in the graph below the colored lines according to the advance of the forecast from 24 hours for day0 to 96 hours for day3) were compared with the data collected by the air quality monitoring stations present in Milan from 15 March to 30 April 2020 (in the graph below the highlighted blue line represents the average daily concentration measured in the Milano Marche station).

The results obtained are very encouraging and show the high reliability of the tool in predicting the concentrations of the various pollutants up to 4 days from the analysis even during a complex situation to simulate such as lockdown. The best performances were obtained for the PM10 parameter for which an average bias was obtained with respect to the observed data not higher than 1.6 µg / m3 and with correlation indices R2 around 0.65. As regards the PM2.5 parameter, correlation values ​​even higher than PM10 were obtained, around 0.70, but with an average overestimate bias of about 5 µg/m3, when the simulation of the regional contribution made by the European CAMS model unlike the simulation of the local traffic contribution, it does not take into account the lockdown, thus overestimating the secondary particulate matter (whose contribution is greater for PM2.5). For nitrogen oxides (NO2), on the other hand, a general underestimation of the average value was obtained (average bias of -5 µg / m3) with correlations around 0.50. 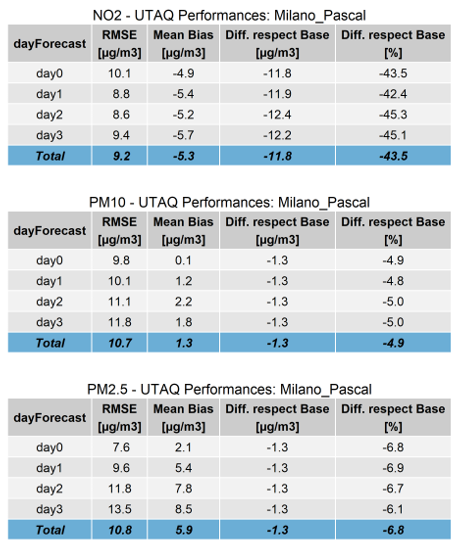 Therefore, by simulating the pollutant concentrations in the air in “normal” mode without lockdown and in the lockdown mode described above, the UTAQ model allowed to estimate in real time the effect of the reduction of local road traffic on PM10 concentrations. It should be noted that the secondary component of atmospheric particulate matter (ie the fraction of particulate matter that forms in the atmosphere as a result of chemical-physical transformations of gaseous pollutants called “precursors”) is included only in the regional component of UTAQ (that calculated by CAMS) and not in the local traffic component of UTAQ, so the estimates obtained are precautionary and include only the effects of the reduction in traffic in the city of Milan. 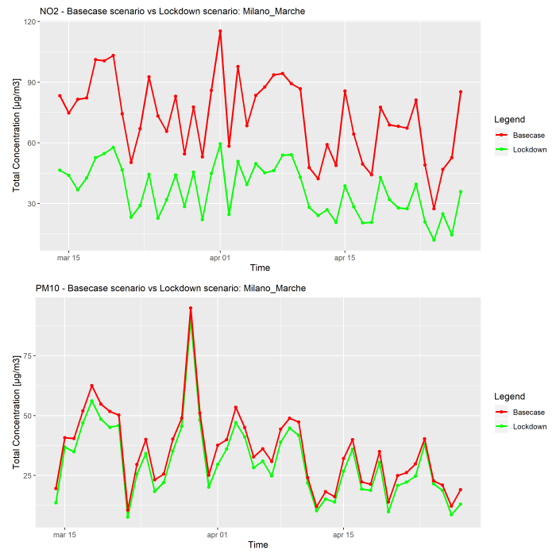 The results obtained show a reduction in PM10 concentrations between 1 µg/m3 and 3 µg/m3, depending on the monitoring station considered, which corresponds to a percentage reduction in the average concentrations for the period between -3% and -10% . As far as nitrogen dioxide is concerned, the final results have shown a reduction in concentrations that varies from around -30% of the urban background station to over -40% for traffic stations, such as viale Marche. At the end of April, with the shutdown of thermal power plants for heating buildings, these reductions became even more important, varying between -50% and -60% depending on the monitoring station considered.